Get fresh music recommendations delivered to your inbox every Friday.

An Angel fell Where the Kestrels Hover (kk022) 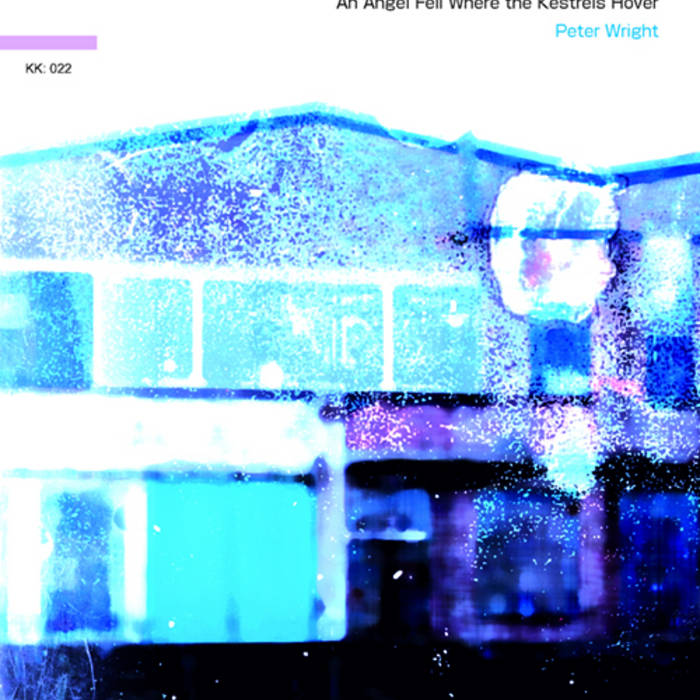 An Angel Fell Where The Kestrels Hover started life as the second part of a two album reflection on my emotive responses to seasonal changes, both in a personal sense and also a more social and geographical sense. My double CD Snow Blind, recorded at the same time and released earlier this year on Install, captures the foreboding darkness and gloom of winter, whilst An Angel Fell... focusses on the spring and summer months, and as a result has a generally sunnier disposition.

Obviously there's a direct literal interpretation at work here, the music is brighter and more melodic, perhaps even sensual, without as much harsh discordance that is predominant on Snow Blind. On 'Lavender Buzz' the seasonal inspiration is most literal, where the foundation of the piece is from a strategically placed microphone in the middle of a clump of lavender plants recording bees collecting nectar from the flowers. But also, as the music was actually recorded during the summer I only had to look out the window or take a walk in the nearby Streatham Common to get a sense of the type of almost lazy sounds I wanted to create. Ironically, this was also one of the wettest July's on record in the UK and the frequency of the often violent thunderstorms also tainted my creative thoughts, neatly juxtaposing light and dark textures.

Aside from the weather, location was also an important factor. I made these recordings in London, England, where my wife and myself were living at the time. This is an album heavily influenced by living in that sprawling, chaotic urban jungle, as most of my last few releases have been. Reflections on physical and mental space are frequently wrapped up in the sounds I make, even at their most abstract. London was my home for nearly 6 years and this was the last recording I made consciously referencing and musing on the city before we moved back to New Zealand in 2008. In many ways it represents the closing of a circle that started with my first UK-based recordings that appeared on Yellow Horizon (PseudoArcana, 2004).

The titles I come up with for my music can be fairly oblique, often abstract and meaningless, but they can reflect my mood at the time I make the sounds themselves. Sometimes they are socially or politically motivated, sometimes very personal and inward-looking. At their most poetic they can be a substitute for lyrics, but the titles are not necessarily designed to lead the listener into a particular train of thought when listening to the sounds. The album title, An Angel Fell Where The Kestrels Hover, was one of the first I came up with when previewing my early mixes on headphones sitting in a South London meadow watching a kestrel circling high above looking for field mice in the long grass. I could immediately see a connection to the birds movements and the way my music drifts and floats. The kestrel's hovering flight, almost like a hummingbird, beating it's wings and making minute adjustments in the wind, allowing it's head to remain absolutely still to enable it's sharp eyes to spot movement in the ground metres below is amazing to watch. And I liked the idea that maybe it could see something in the grass that us mere mortals can not, like a fallen angel.

New Zealand native Peter Wright has invested a significant chunk of the last 20 years investigating ways of deconstructing the guitar, loosening the shackles by which the instrument is traditionally constrained, and presenting re-imagined abstract audio fields. At times Wright's instrumental musings have an almost lyrical, poetic familiarity, like a half-formed memory flickering out a distant signal from damaged synapses. The primitive musical forms that result can seem deeply personal and intimate, almost as if you have stumbled upon a private ceremony by accident, but despite the feeling you are an intruder, you cannot pull away.

For the past decade Wright has worked under his own name, recording and performing from bases in New Zealand and the UK, as well as touring Europe and the USA, and releasing 7 albums (including one double and one triple disc set) and a host of limited edition cdrs and records on labels across the world including Install, Celebrate PSI Phenomenon, PseudoArcana, Last Visible Dog, Archive, Students of Decay, Digitalis.

After a year of traveling and keeping a low profile, 2009 has so far seen the issue of no less than 2 full length albums ('Snow Blind' 2xCD [Install], 'Bright Failing Star' LP [Release The Bats], a 7" record and two collaborative projects, and work has begun on a collectors box of out of print and unreleased recordings, photography, film and ephemera from the past 6 or so years of activity.

Photographs by PW, London, 2007. Layout and design by mondii.

Independent record company based in Tokyo, Japan. Since 2005, we have released over 250 fresh music from all over the world from our in-house labels, SPEKK, the ETHNORTH GALLERY, Panai, kaico, Lantern, Wonderyou, Kurage, Happy Prince, Fennely, Primo, Moamoo and more.

Bandcamp Daily  your guide to the world of Bandcamp

Semiratruth joins the show to discuss their latest release, "loading..".